Steamboat Springs High Water Season and Not Being Organic

Steamboat Springs High Water Season and Not Being Organic 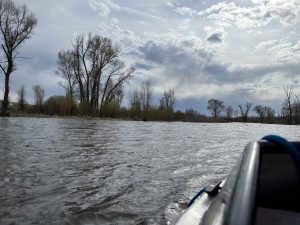 This season will last for about a month.  Floating the river gets more and more dangerous, not because of waves or debris, but because the water is so high, that there is little space under bridges to float.  The bridges most commonly found along the way are road crossings.  There are some roads that are private crossings for ranches, but county road crossings are most prevalent.

This past week I got a chance to float the river.  A friend, Mal, asked me to meet him for ‘beers on the river’.  I got excited immediately.  Over the next couple of hours, I finished what I was doing and got my rafting gear together.  I asked him if he needed me to be a shuttle driver and he said no.  Okay, I thought, I got my gear together and met him at 4:00 at the Hayden Pump House boat ramp.

When I arrived, I was pleasantly surprised because he had brought his jet boat!

This watercraft is 10 feet long and just enough room for two men and a Boston Terrier (Max), who sported a bright yellow lifejacket.  (The dude has style!)  All aluminum, this boat has an inboard jet motor and can move really fast upstream.

Mal took me upstream, through channels that do not flow in lower water, over huge eddies that the boat cruised through like a spoon in whipped cream.  It was a great time all the way to Steamboat.  Going upstream at top speeds of 50 mph and lower speeds to adventure and explore, it took us about an hour to get to Steamboat from Hayden.

We turned around near James Brown Bridge and made our way west.  About a third of the way back, we slowed down to get our bearings on a low head dam that we had already gone upstream on, but was much different going downstream.

All of us put our lifejackets on as Mal looked for the safest route over.  To the left, there was a slower water flow as compared to the middle where there was a large wave train and a swirling mess of fast water.  Mal lined us up in the slower water, gunned the motor to make it across, and off we went.

After a brief moment of being in the air, the jet boat landed on a big, unseen, rock on the other side.  BOOM went to the bottom of the boat, and then our engine died!  Little known to us, the bump on the rock shook everything and our engine died.

To make a long story short, we had lost gas to the engine and had to float 3 miles without paddles, because they were taken out at the end of last season.  The floating was a little stressful because Mal couldn’t figure out the engine problem and we needed to get to the north shore.

With the county road to the Milner dump in front of us, I took my life jacket and used it as a paddle.  I pulled us to shore just past the bridge for the county road.  Mal got out of the boat and made a quick call.  15 minutes later we had two paddles and two hoodies to get us to the take out.

In the end, the trip to Steamboat was an hour and the trip back to the take out was 3 and a half hours!  It was a lot of fun and something I would definitely do again.