Rafting the Yampa River in July

Rafting the Yampa River in July 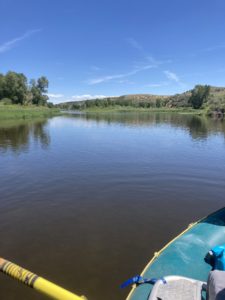 Steamboat Springs is beautiful this time of year.  We are getting short rains in the afternoons which is keeping much of our area very green.  This Summer, compared to the last two, is what Steamboat summers are about to me.  Low 80 degree temperatures, cooling showers in the afternoon, and breezes blowing Cottonwood leaves back and forth.

Some friends of ours from the Chicago area are in for a few weeks.  I promised to take them on a river float.  So, this past weekend we took time together to float a shorter section of the Yampa River in the Hayden area.

This area of the river is mostly flat water.  The water flows along in big hurry earlier in the season but now the Summer flow is quite lazy.  The river is wide and winding on its way to become part of the Green River, and then the Colorado River.  Today, we left soon after noon.  Our raft, once pushed off from shore, caught the main current and took us down river at a speed that allowed for deep relaxation.

The float, planned to be about three and half hours, gave us time to get a bit more tan, swim in fantastic mountain water, and see wildlife.  The raptors we saw included bald eagles, a golden eagle (which was HUGE), several blue herons, mergansers, deer, and finches.

River time is special because it is as if the clock has stopped.  It’s you floating along, maybe chatting, maybe lying down with a hat over your face, and finding time to enjoy aspen groves, the geology of mountains, and trying to see trout doing their best to hide from the afternoon sun.  River time creates a feeling of timelessness.  It’s almost as if it doesn’t matter if I go to work tomorrow.

That morning was the time I was able to coordinate with a friend who had puppies and I was picking the one up that was for me.  Her name is Pepper.  She is half Labrador and half shepherd.  We were quite nervous to take her to the river!  It’s been 15 years or more since I had a puppy.  On this day, I was making extra efforts to keep her safe and give her some water time.  This day was obviously the first time she had been swimming!  She didn’t know what to do when she was all wet. 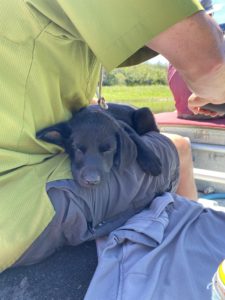 This float has excellent views of the Yampa Valley, giving us vistas of pastures, small forests of cottonwood trees or aspen groves, and the rolling northern ridge-line that runs State Highway 40.  The ridges are low, covered in sagebrush, and have large bowls where we could see ranching structures for protecting livestock from the weather.

Floating on the river is something I don’t take for granted.  It takes a little bit of work to get on the water.  But that doesn’t compare to the feelings a person gets when enjoying nature and the only agenda of the hour is smiling, breathing, and soaking in nature.