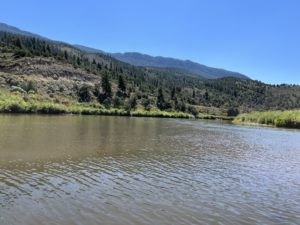 After a good couple of weeks of hot Summer days, the weather has changed towards Autumn.  Some cottonwood trees by the river have started to change to yellow, but for the most part, it is still the end of Summer.  The nights are more cold than cool, and the days are blue skies and comfortable.  Now that Labor Day has passed, Steamboat Springs is a quieter town with fewer visitors.  Also on Labor Day weekend, we got to take a raft trip down the Colorado River!

It has been difficult to work through the hysteria in the news.  With headlines and stories that drive us into anxiety more than informing us, I wouldn’t be surprised if a report has been issued on how people are no longer watching or reading the news as they had 10 years ago.

And some news isn’t being reported.  There hasn’t been a real estate article in the local paper addressing changes in our local market in two months, other than the weekly sales report.  No news on a big ranch selling, or broker opinions on what is going on in the market.

Activity on those pages, over the past two months, shows that total sales volume in dollars is changing.  Commonly, the volume is between $30-35 million.  In the past two months, there have been weeks in the $20 million’s with $20 million being the lowest at the beginning of September. During the flurry of business over the last year, it was common to see a total volume of over $50 million.

New listings are seasonally fewer and are being priced more reasonably.  It appears that Sellers and Brokers both admit that we are at a plateau in values rising.  (Though there are listings that come on the market and I cringe at their over-valuation.  It’s not fun being late to the party…)

One of my favorite indicators in housing is changes in rent values.  Usually, at this time of year, there are a number of available homes for rent.  The past few years had pretty much nothing available.  A new rental came on the market and the landlord would get 20 applications.  Today, there are several available and some of the listings have been around for weeks.  Another interesting piece is that rent values have not gone up for a year.

In national news, there has been talk of builder sentiment going down.  Large builders are not as bullish as they were over the last several years.  In Steamboat Springs, building is continuing.  Building permits are strong and new homes are going up in Steamboat and Hayden.  Large projects are continuing to build out and the units are selling near their recent highs.

Imagining the future, things are trending much like other market tops and wanes.  We are going into Winter, which is traditionally slow for real estate in Steamboat Springs.  With economic policies changing to combat inflation, it’s likely we will see dominantly sales related to folks needing a place to live rather than many sales being done to have a dream home in the mountains.  That being said, affluent families will still buy real estate to preserve wealth.