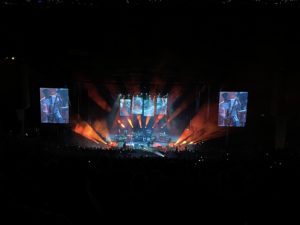 Summertime has many things to do.  One of the top things I enjoy is going to Red Rocks.

If you haven’t heard of Red Rocks, it’s an all-natural amphitheater at the foothills of Denver.  Large red sandstone hogbacks prominently rise along the front range and these in particular form a tight area that has the best acoustics I’ve run into in being a live music fan.

In the early 1900s, this space was known for its acoustics.  There is a photo in the Red Rocks museum, downstairs in the venue, of a handful of people on a rough sandstone shelf with a grand piano.  It’s a fascinating photo when taken into account what the stage and audience stands look like today.

Red Rocks has dynamic sound.  Sound is specific to your location in the venue.  Of course, this is true of most venues, however, few venues are placed in solid sandstone.  At the stage, the lowest part of the venue, the sound is clear and the view of the band is excellent.  Towards the top, the view of the band isn’t easy, however, the sound is outstanding as if it were changed to fill up your senses with full tones and hues.

The views from Red Rocks are very Colorado.  Mountains left and right, complete with green valleys to contrast the red sandstone hogbacks.  If you sit above the stage level, views of Denver and the Front Range are easy to enjoy.  This last concert we sat further up in the venue and watched airplanes as they landed at DIA and took off for other parts of the world.

Two natural phenomena are seen when the weather is right.  First, thunderstorms, which may or may not have gone across Red Rocks, will travel east.  As they move, lightning entertains viewers.  Explosions in clouds light them up.  Arcing bolts connect to the ground in more than one spot.

The second is an eastern moonrise.  This is more rare.  I’ve seen it three times in the last five years, and am still feeling lucky.  In less than five minutes, the moon rises in the east.  The full moon is my favorite.  The speed, color, and depth of this moonrise make it as interesting as a lunar eclipse.  It can also make you feel like you are in a science fiction story. 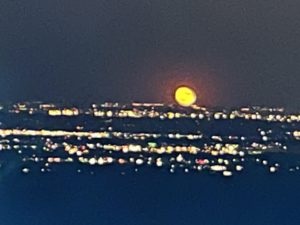 The event I attended, was for California reggae band Slightly Stopped.  The band members are just a little younger than me and have a distinct sound that they have built for decades.  We enjoyed the moonrise, some rain and lightning, and a fantastic Colorado crowd!  It was one of the funnest shows I have seen at Red Rocks, and I’ve seen more than 30.

If there is an opportunity for you to visit Red Rocks, you will definitely enjoy the geology, people, and weather.  I encourage you to visit the museum found downstairs.  It has the history of Red Rocks plus lists of bands and dates they played at Red Rocks.  If you are really into it, there is a VIP hallway that usually only artists go through.  It has signatures of stars that played there in the last few decades.  Sometimes, buying a VIP ticket to your show will gain you access.